Maybe the world’s oldest republic thought that, after the 2011 Financial Act – the first in its long history with a clear and quite considerable deficit – the situation would right itself. Yet it is still being held back.

SAN MARINO – Maybe the world’s oldest republic thought that, after the 2011 Financial Act – the first in its long history with a clear and quite considerable deficit – the situation would right itself. Yet it is still being held back. Obstructed by Giulio Tremonti, a final agreement has yet to be reached on dual taxation with Italy and all relevant attachments. However, even if Tremonti should suddenly change his mind and fall in love with San Marino again (as a professional accountant he came here often), it doesn’t mean there are clear skies ahead. The world has changed, the economy of San Marino hasn’t. Or rather, it’s in that classic situation of being neither fish nor fowl. Should it abandon the tranquillity of a small state that lives on allied Italian (financial) activities or take a step towards the unknown? Tax concessions alone are no longer enough to attract capital. It also looks like San Marino has finally abandoned the hypocritical idea of turning a blind eye to dirty money. Adequate services and financial and geopolitical strategies are needed to open up to the world’s markets. Compared to servitude to Italy, the latter will seem like a leap into the unknown, but opportunities can only come from that direction. This doesn’t mean breaking ties with Italy. On the contrary, it means working together to grow together. There are emergent countries – or rather, emerged countries – that see Europe as a place to invest in. They are looking for platforms and placing their bets on companies and know-how. Although it doesn’t realize it, San Marino is sitting on a goldmine. It could be versatile, dynamic and fast and above all, the magnet for capital Italy has failed to become and doesn’t want to become. San Marino uses the euro and is practically in Europe, yet has the good fortune of not having the restrictions imposed by the European Union. China and Asia know this only too well. Now it’s the turn of the people of San Marino. 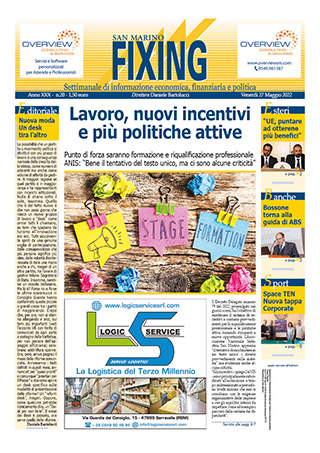