Internazionalisation: the stalemate with Italy

For the Republic of San Marino, the real problem remains relations with Italy.

SAN MARINO – For the Republic of San Marino, the real problem remains relations with Italy. Relations with Italy. For the Republic of San Marino, the real problem remains relations with Italy. It may appear banal but is in fact, something we need to tackle in any reflection we want to make. The clampdown on tax havens, which began as a way to combat the international crisis, culminated in the tax amnesty that drained 4.6 billion euro from the coffers of the Republic of San Marino, about a third of overall deposits. Besides the amnesty, all relations between the two countries (regulated by bilateral agreements) have practically been frozen by the Italian minister Tremonti, causing considerable problems for San Marino-based companies that work with Italy – in other words, as we will see subsequently, the vast majority of companies in San Marino. Over the last year, the economic crisis in San Marino has not only been linked to the banking-financial sector (which, we should recall, represented 18% of GDP in 2009, compared to 39% for industry and construction). Figures regarding San Marino’s Gross Domestic Product are clear: after a period of aggressive growth (Chinese, some said), an initial fall was registered in 2008 (-1%) and a veritable crash in 2009, with a worrying drop of 13%. According to the International Monetary Fund experts who assessed San Marino in early 2010 an estimated further fall of 1% is predicted, whilst 2011 could show initial signs of an upturn, but only if relations with Rome are normalized. Real economy. In recent years, the manufacturing sector has been the driving force of the economy in San Marino, with stable businesses that produce and employ about 6 thousand cross-border workers, mainly from the Provinces of Rimini and Pesaro-Urbino. Despite its recent recognition as a UNESCO World Heritage Site, tourism – another key asset for the republic – is experiencing a downturn. For the financial system, 2011 will be a very difficult year; if Italian insecurity has already led to a return to depositing capital overseas (speaking of which, how can the Italian Inland Revenue Service see this as a presumption of guilt?), whilst continuing to rely on the factor of confidentiality, San Marino must find new ways of attracting capital to the banking and financial sectors. What will make the difference here, are the people. Limits and potential. It’s always a question of points of view. San Marino has a considerable limit; its size. A country that measures 60 km² with just 30,000 inhabitants is clearly limited in terms of development. However, if we change perspective, its size could prove to be one of its key strengths. It offers the possibility to access services that are fast and efficient because they put investors in direct contact with the country’s management benches and because it means low taxation and limited bureaucracy. San Marino therefore has some indispensible key elements that make it competitive on the international scene. Over the next few months, it will be important to work on other aspects. The labour market, for example, is still too rigid, the process towards transparency is still in its early stages and regulatory bodies must be replaced and strengthened if combating distortions is to be more effective (collaboration with the Italian Financial Police has already started to give positive results). Analyzing the pros and cons, San Marino has everything necessary to throw itself into the international context, but only if it continues to consolidate its regulatory mechanisms and develops an increasingly dynamic and professional enterprise culture. Internationalization today. The reality of San Marino today still fails to look much further than the “boot” of Italy. In fact, according to figures issued by the Chamber of Commerce (“Report on San Marino Enterprises in 2009”), Italy is the sole trade partner for three out of four businesses in San Marino. Only a small number of the remaining 25% of businesses that stated they also traded with other overseas countries declared a significant share of turnover (over 10%) outside Italy; this is true of only 15% of businesses, which have begun a process of internationalization. This is virgin territory – or almost – and offers great margins for development. A vision for the future. Having a clear vision for the future is important. San Marino will only succeed in developing its economy, if it manages to profit from a competitive differentiation that exploits specific sectors and economic niches. However, the real difference will come about if it manages to trigger a cultural training mechanism that improves the level of its management benches, the entrepreneurial categories and in due time, the entire population. In this respect, dialogue is key and that’s why the “San Marino between East and West” forum should be considered a step in the right direction. 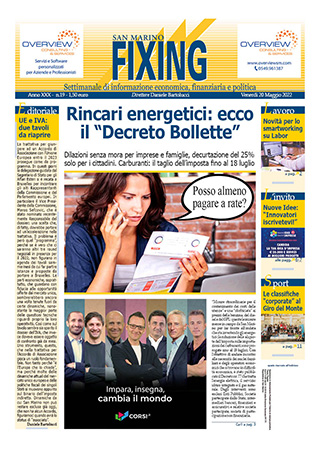