San Marino: an uphill road, but one we can certainly climb. Opening up to Arab investors

SAN MARINO – Almost a year ago, while discussing during a forum organized by the Secretary of State for Economic Development – in which the Secretaries of State for Overseas and Finances also participated – the possibility of San Marino becoming a crossroads between the East and West, the OECD postponed giving its opinion on the Republic of San Marino. Some steps still had to be taken before entering phase two of the transparency project. Now, whilst the same Secretaries of State are preparing to discuss how the capacity and methods for attracting overseas capitals have changed, the OECD is about to make its vote on the transparency of San Marino official. Basically, San Marino has passed. Therefore, even the world’s oldest republic will be able to take part in phase two, which will begin for all member countries in 2012, achieving a result that, for many, seemed beyond reach. Above all, for the Italian Ministry of the Economy that will probably have to make some definitive decisions regarding San Marino next year. These will almost certainly include an agreement on double taxation and a reprise of civil – almost friendly – relations.

In this magazine Carlo Pelanda, a professor at Georgia University and an expert on strategies, specified that “San Marino found itself suffering from a crisis for two reasons. Basically, the problems with Italy led to a draining of the financial system and a fall in the territorial brand. The second aspect is global and certainly doesn’t help recovery. There has been an outflow from the banking system and probably the flight in companies once attracted by the tax differential. This however does not balance out the process of demonization driven by Italy”. However, having become aware of the fact that the war between Italy and San Marino is over, in all probability “the Italian government realized it had exaggerated. It’s one thing reducing the inefficiency of financial flows and quite another triggering an authentic war”, Pelanda added, “unsurprisingly, in the last year, important sector agreements have been reached, including one on technology”.

In other words, at the conference on Friday there will be a discussion on the difficulties that lie ahead, but ones that can overcome. A concrete example comes from the canton of Ticino: the ground-breaking Copernicus project thanks to which the Italian part of Switzerland has attracted hundreds of overseas companies in the last 15 years. It is quickly changing in order to maintain its efficiency and at the same time responding to the extremely rapid changes imposed by the Mexican meeting of the OECD. The Mayor of Verona, Flavio Tosi, will bring some important evidence: the commitment of the political world to maintain close relations between the territory, the foundations and the banks. The Unicredit bank case has been discussed widely and – regardless of the solution of the diatribe between the “Italians” and “Libyans” – has made it clear that the financial markets should never move away from the roots of the territory, the very same territory that has permitted their development.

Furthermore, certain specific stratagems will be necessary for the Republic of San Marino. The first will involve the redefinition of bilateral agreements with Rome for the banking system and the second – in full agreement with Italy – will focus on opening the San Marino marketplace to important overseas investors, perhaps even from the Arab world.

A window onto this reality will be provided by the Chairman of the Jordanian Young Economists Society, Samer Ghazi Jamal Kawar, and H.E. Saywan Sabir Mustafa Barzani, Ambassador of the Republic of Iraq in Italy since May 2010.

Hamad Alremeithi, prince of Abu Dhabi, whose family is linked to mangrove trees with which he has built islands, as well as the buildings and hotels on them, will present Abu Dhabi’s point of view with regard to the future of Europe and at the same time, the opportunities available for countries in the Gulf of Africa. Finally, from an economic point of view, he will discuss whether he sees China as a danger or an opportunity. Yet, according to Hamad, given the crisis and shopping opportunities, this is the right time to invest in Europe. Could a country that offers tax concessions be used to create companies through which to invest? For example, with regard to Expo 2015. There’s time – even for San Marino – to come up with answers to these questions, but not too much time.

As well as tax concessions and more streamlined bureaucracy, which clearly does not mean accommodating bureaucracy – something it should never be – investors demand certainties. For this reason too, a part of the forum will be dedicated to the role of economic and financial information. The figures and data regarding the budget of a state always need to be monitored by the press, in order to trigger a virtuous process that will attract capital. The political world may be bothered by a well-prepared and free press, but for any country, this too is a long-term investment. 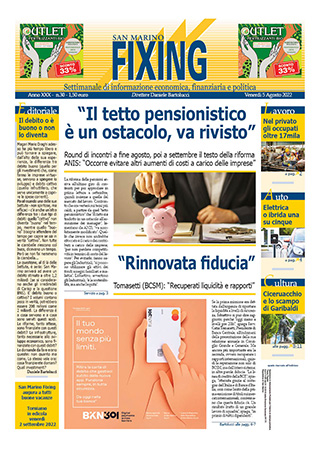